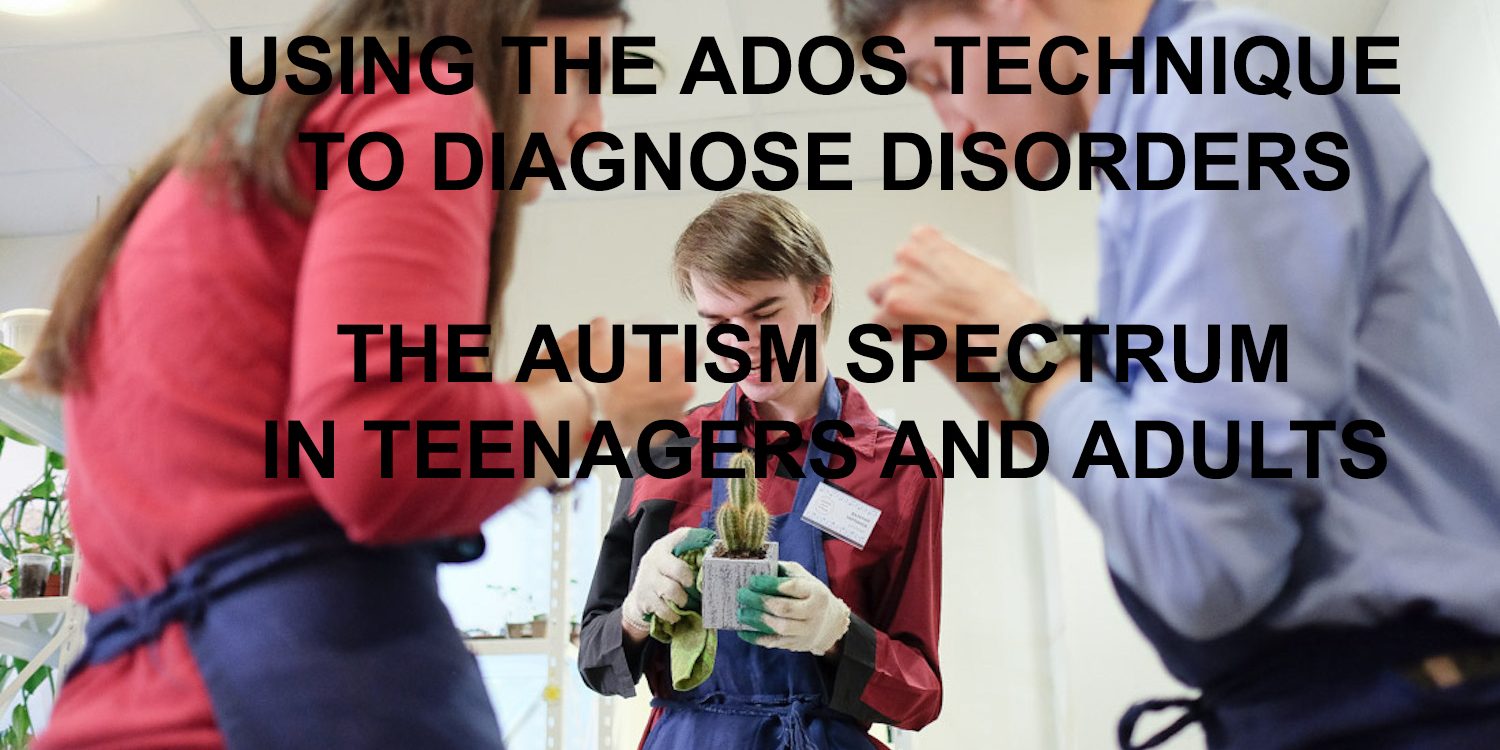 Currently, many researchers and specialists in various fields are focused on the earliest possible diagnosis of autism spectrum disorders. However, the diagnosis of a group of adults with autism remains no less urgent. The “gold standard” for this is the ADOS technique. The article discusses some of the features of Module 4, designed to diagnose adolescents and adults with ASD.

Autism spectrum disorders (ASD) are a heterogeneous group of developmental disorders characterized by the “autism triad,” that is, disorders in three areas: social communication, social interaction, and the presence of limited, repetitive behaviors or interests [ 1]. Currently, the prevalence of ASD has increased significantly, and, according to estimates of various researchers, is at least 1.5% in developed countries.

The ratio of boys and girls with ASD is 4: 1, although it may decrease with increasing severity of the condition [5]. The reasons for this difference are still unclear, some researchers have shown that they are of a genetic nature [6], others confirm that psychosocial environmental factors in rare cases affect the phenotypic manifestation [7].

Recently, an increase in autism has been increasingly observed among people without comorbid mental retardation [2, 3]. Typical symptoms of ASD usually appear between 3 and 4 years of age, although these symptoms may not fully develop until school age or later. However, studies show that symptoms of ASD are present as early as 6 to 18 months of age [4]. Despite the fact that more and more efforts are now being made to identify ASD at the earliest possible age, the issue of diagnosis in adolescents and adults remains extremely relevant.

In this regard, specialists of various profiles – doctors, psychologists, educators – are faced with the task of accurately diagnosing ASD, which is not always easy. Timely identification of violations makes it possible to more accurately draw up a route for accompanying a person with ASD, and also increases the efficiency of interventions and improves future prognosis and adaptation.

To diagnose autism, a specialist needs to collect as much information as possible about the subject: to ask a parent or close relative in detail about the history of development, the results of cognitive tests (if any), as well as about the experience of the correction passed. In parallel with this, observation of the adolescent or adult himself is informative.

Among the screening methods for ASD, the most commonly used are the SCQ (Social and Communication Questionnaire), CARS-2 (Autism Rating Scale in Children). The advantages of screening methods are that a parent or other close person can fill them in on their own and the filling itself does not take much time. However, it is important to remember that all of these techniques only identify the risk of ASD and should not be used to make a diagnosis.

To determine the diagnostic group, experts use the “gold standard” of methods, which includes the ADI-R (Autism Diagnostic Interview) and ADOS (Autism Diagnostic Observation Schedule). The difference between these methods and screening methods is that they are standardized and should only be performed by specialists who have received appropriate training.

ADOS (Autism Diagnostic Observation Schedule) is a standardized protocol for monitoring social and communicative behavior associated with ASD. It is recommended by the UK National Institute for Health and Quality of Care (NICE) [8], is a reliable diagnostic tool, recognized as objective in vivo and demonstrates high predictive reliability [9].

The ADOS methodology consists of four modules, which are designed to assess autistic manifestations in children, adolescents and adults with different levels of individual and speech development. Its second edition, ADOS-2, includes five modules – it includes a module for assessing toddlers (Module T) [10].

Module 4 should be used to assess older adolescents and adults who use fluent speech (generally for 16 years and older). The choice of the correct module is very important, and for Module 4, specialists should rely not only on the level of expressive speech, but also on the appropriateness of the tasks, the age of the subject and the level of independence. For adolescents, it is possible to choose Module 3 or 4, depending on their level of independence. The ADOS Technique is not intended for use in non-verbal adolescents and adults.

The diagnosis takes from 40 to 60 minutes, during which the specialist assesses the peculiarities of speech, non-verbal forms of communication, social interaction, unusual sensory interests, unusual hobbies and other forms of undesirable behavior. Unlike Modules 1-3 and T (for ADOS-2), in Module 4 game tasks are completely absent. There are some social-emotional tasks that coincide with Module 3, for example, “Social difficulties and irritation”, “Emotions”, “Friends, relationships and marriage”, “Loneliness”.

The main emphasis in Module 4 is on the assessment of the ability to understand emotions, humor, as well as on the assessment of spontaneous speech. In addition, the module includes tasks on the ability to predict your future. At the same time, Module 4 is more “conversational” than other modules, so the examination may take longer. However, in any case, the examination time should not exceed 60 minutes.

In total, Module 4 consists of 10-15 types of activities, for which 32 marks are given, which are presented in the figure below. The score for each item is given by the interviewer in accordance with the general encryption rules and specific criteria that are specified in each item of the protocol for Module 4.

It should be noted that no materials are provided for the interview questions, and interesting materials suitable for adolescents and adults have been selected for the tasks of this module.

In general, Module 4 pursues the following goals: monitoring the spontaneous social and communicative behavior of a person with ASD, assessing the participant’s ability to effectively and adequately perform specific tasks, taking into account the requirements of specific situations, as well as creating situations for assessing the participant’s expressive speech. Thus, in the course of the interview, an environment is created that is close to natural interaction. If it is difficult for the participant to maintain a long abstract conversation, the interviewer can alternate questions with social tasks.

While completing specific tasks or immediately after completing them, the interviewer should take notes of behaviors (for example, smiling or voluntarily giving information). All these records are taken into account in encryption. Module 4 is encrypted immediately after the end of the examination. Both ADOS editions assume that the adolescent or adult should be assigned to one of the diagnostic groups: autism, autism spectrum and non-spectrum autism. The diagnostic group “autism” differs from the group “spectrum of autism” in more pronounced disorders.

8. National Institute for Health and Clinical Excellence, Autism: Recognition, Referral, Diagnosis and Management of Adults on the Autism Spectrum. 2012.

Methods for the diagnosis of of early childhood autism
December 12, 2021
Recent posts
Go to Top